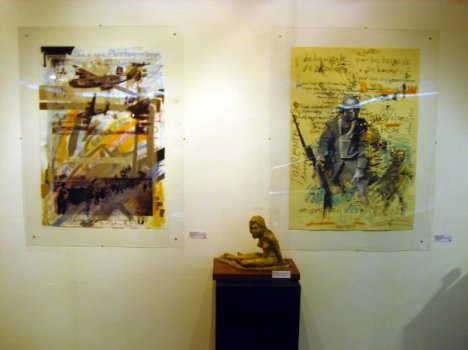 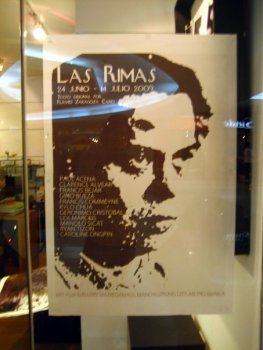 Cultural critic Rey Chow chimes in that one form of power involved in the translation of anything—from culture through all its expressive forms and texts/objects—is locatable in the etymological link of translation with tradition.

“How,” Chow asks, “is tradition to be transmitted, to be passed on, if not through translation?”

“Las Rimas,” a group exhibition of 10 emergent artists (nine from UP, one from Ateneo), which opened at Asia Art Gallery Megamall on June 24 and is now nearly sold out, generally “wishes,” according to its youthful curator Geronimo Cristobal Jr., “for the interested viewer to appreciate heritage and culture in their many forms and faces.”

Cristobal says the exhibition is designed to help transmit a certain tradition, “along with its historical baggage,” to a new generation.

Serving as inspiration for the “Las Rimas” project is a little-known lyric poem, “Las Rimas,” by the Filipino-Hispanic poet Flavio Zaragoza Cano.

The tragic fortunes of this part of Philippine literary heritage, under the relentless onslaught of the Yankees’ culture following American colonization, we know only so well, thanks to the late Nick Joaquin who wrote what were probably the most elegiac critiques of this tectonic cultural displacement and its most poignant obituaries.

Cano’s work came to the attention of Cristobal while conducting independent research on Filipino Hispanismo and the Ilustrado legacy in their ephemeral flowering and extended obsolescence during the American colonial period.

He stumbled upon an English-language translation of “Las Rimas” from the Spanish original by L.C. Brilliantes and reportedly commissioned by the Ayalas (Zaragoza Cano won the Premio Zobel for Spanish poetry in 1929).

Thus began Cristobal’s quest to think hard about translation and what he found out later, on more research, as its etymological and powerful relationship to the transmission of tradition.

More specifically, given his Malikhaing Panulat (Creative Writing) major, his art-curatorial studies and his art practice at UP, he started to explore the possibility, with fellow Artists’ Circle members at the UP College of Fine Arts and using Cano’s poem as inspiration and pretext, of a collaborative project in “formal and cultural translation.”

What he wanted to happen was a process and a project by which visual art practice could be recruited to the service of a dramatic reenactment of his own original experience of rediscovering forgotten tradition (such as what Cano stood for) via the agency of translation/s, along with meditations on the creative and critical dimensions of artmaking and art appreciation that such a process would entail.

In actual output, Las Rimas turned out to be, in Cristobal’s resonant word from his curatorial notes, “multiform.”

The project became much more than a translation from poem (“Las Rimas”) into painting, as the completed and exhibited works now include—apart from unusual and singular mixed-media and experimental “paintings” by Cristobal himself and participating artists Francis Commeyne, Francis Bejar, Lex Marcos, Clarence Alvear, Paul Acena and Caroline Ongpin (the lone female contributor)—Ryan Tizon’s haunting black-and-white photographs in glass encasements; glossy sculptures in cast marble by Kylo Chua (of Ateneo); and rough-edged moldings, in stained polyresin on epoxied wooden base, by Manolo Sicat (recently hired faculty member of UP Baguio’s Diploma in Fine Arts Program).

Painting here is framed by quote marks, given Cristobal’s guidelines, which include the injunction, according to Caroline Ongpin, that “the body of works should look somewhat unfinished and more sketchy.”

Strikingly, painter Francis Commeyne, who is fluent in Spanish, says his participation accorded well with his own aesthetic creed: “As an artist, I combine different media, and in my work I use unorthodox grounds (rice sacks, metal sheet, a chair, a mirror) as I feel that it is necessary to deviate from the traditional oil paint on canvas, or in this case, solely one medium, like watercolor on paper.”

As he recognized from the beginning, “the goal of the show was to capture the process—the raw, sketch-like effects, trial-and-error experiments, associated with the translation of words into images, Spanish text into visual.”

Ongpin’s account of her decision to be mock-literal with one contribution, only to be literary in a visual (or what French philosopher of art Jacques Rancière would call “mediumistic”) way with the finished product, is quite telling.

Noting the preponderance of floral figures in the verbal imagery of Cano’s poem, Ongpin says that for the piece “Fragrant Memories” she “chose to use flowers, specifically violets…. but instead of making them colorful or vivid,” as would be stereotypically expected of a female artist, “reduced the colors so that the piece would not look too romantic.”

She based the piece on stanza 2: “[Rhymes] are aromas enclosed in a poet’s soul/in the dreaming soul/that fly after sweet dreams in the air/that perfume the hair of a seductive virgin/with the fragrance of violets…”

But Ongpin felt that while the speaker seemed “so in love with this woman that he felt and saw her presence in everything around him, even in his dreams,” a darker side to all that romance emerges on several rereadings: obsession. Hence her decision to make the piece look darker.

Similarly, Commeyne chose, for his piece “Lost Dragonfly,” to focus on stanza 3, where the persona’s soul now chases, in an orchard of roses, “a bewitching idea (una imagen hechicera)” which is that of a “lost dragonfly (libélula perdida)” escaping into “vague and misty horizons (las vargas y brumosas lontananzas).”

The contrast in poetry between verbal structure and “a sense of movement through word-choice and imagery,” which this stanza exemplifies for him with its dynamic mise en scène, was what made him juxtapose “structured, straight and rigid lines/brushstrokes” with the “wild washes, stains, and biomorphic forms” in the strategically vivisected spaces of his composition.

While the poem teems with “beauty, overwhelming splendor and positive imagery,” Commeyne says he “still felt a sense of loneliness, agony, and feeling lost—much like the image of a lost dragonfly in the orchard.”

Sculptor Kylo Chua, meanwhile, says: “I believe man is most beautiful when he is lost.” Asked what he would like viewers to come away with from inspecting his smoothly marbled images for “Las Rimas,” Chua declares: “I want them to enjoy getting lost!”

Lost dragonfly (“getting lost”) is a perfect metaphor for the evanescent legacy of Cano to which these artists now pay creative and critical tribute with such rigorously conceived and deeply engaged artmaking.

As all the “Las Rimas” artists eloquently suggest with their works, Cano can even begin to be restored to Philippine tradition as pretext and predecessor.

“Finding meaning is like unlocking or digging; you get confused and distracted; you get your hands dirty,” says Cristobal. “While doing ‘Libélula Perdida,’ I was attracted to the dirt produced by pencil shavings and the oil on my hands. I noticed that words give out meaning in the same way: They are constructed, and that surprises concerning, and new ways of seeing and hearing and understanding, such meaning emerge all the time.”

A longer version of this essay examining the theory of cultural politics, signification, and art informing the “Las Rimas” project, with specific illustrations from the completed works and in the context of Jacques Rancière’s philosophy, will appear in a forthcoming anthology of Philippine art criticism.

E-mail the author at ocampomanes@ateneo.edu or the curator Geronimo Cristobal Jr. at juncristobal@gmail.com.

This site uses Akismet to reduce spam. Learn how your comment data is processed.