Pope Francis kisses the feet of South Sudan President Salva Kiir April 11, 2019 at the conclusion of a two-day retreat at the Vatican for the political leaders of African nations. The pope begged the leaders to give peace a chance. At right is Vice President Riek Machar. (Photo Catholic News Service/Vatican Media via Reuters) 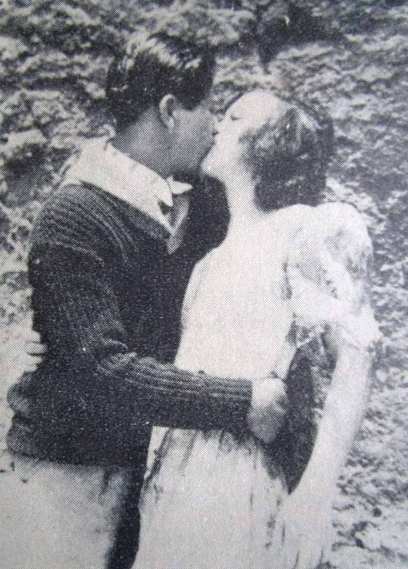 Filipino Luis Tuason and American Dimples Cooper in 1926 in front of the ruins of a church share the first real kiss in Philippine Cinema. (Photo Esquire Philippines)

If the kiss is magical in the sacred realm, then it must also be the case in the realm of the profane. A kiss in the movies presents to us the diametrically opposed equivalent of a divine kiss given to and by the Pope.
The ability of the kiss to move the story forward is magical enough. Beyond that, we believe that a kiss, as a concrete expression, is underpinned by a transcendent power of projecting the desires of a repressed multitude of sinners through the power of the camera. This, afterall, is the power of cinema, is it not?
The world’s first kissing scene captured on film was shot in April 1896 at Edison Studios in New Jersey. It was between May Irwin and John Rice, a re-enactment of the kiss from the stage musical The Widow Jones. The 18-second kiss—which includes rubbing of noses and pecks—shocked the church and the conservative establishment who called for its censorship.
It was not long before passionate displays of affection became routine in American movies. But the most explicit was performed by reel and real life lovers, Greta Garbo and Gilbert Roland, in the movie, The Flesh and the Devil, shown in 1926. Their torrid, open-mouth kissing was the first French kiss in an American film. Their moment of osculation was photographed by William Daniels, using natural lighting (such as a lit match stick), and was described as “very erotic.”
I learned recently from a magazine article in Esquire, that the first on-screen kiss in Philippine cinema came in the same year. A US-trained filmmaker, Vicente Salumbides, began a film project with the title Tatlong Hambog (Three Braggarts), a silent romantic comedy starring the Luis Tuason, a nationally ranked boxer and the Filipina-American actress named Dimples Cooper, who appeared on the vaudeville stage.
The film story called for a kissing scene, which directors usually simulated using tricks such as fading out the lights before the lips of the actors touched or shooting from the back so as to hide the actors’ lips.
Salumbides and his stars dared break the kissing taboo by performing the real thing—a full mouth-to-mouth kiss that was shot against the ruins of the old Guadalupe Church in Makati, then a suburb of Manila. The kiss is recognized as the first historic osculation in Philippine movies. The event not only paved the way for more expressive kissing scenes in future Philippine movies, it also served as a barometer of society’s changing moral outlook.
Culianu in Eros and Magic in the Renaissance, writes that “the capacity for and understanding of magic was, before the scientific revolution, understood as an achievement of desire, the ascension of eros to a certain potency.”
I think of cinema this way. As a particular present-day medium with the capacity to arouse the eros to a certain potency for massive social feeling. That’s why cinema is an instrument that is indispensable in the toolkit of any modern day politician or social magician. We think of cinema as a modern mass medium but it definitely has cultural roots in ancient theater and religion. That the first kiss in Philippine cinema was done in the ruins of an old church, cannot be more poetic.
Cinema began in the Philippines through the production of religious movies, among them, the Pasion (Passion), the filming of a religious play, and Los Milagros de la Virgen de Antipolo (Miracles of the Virgin of Antipolo). The first “blockbuster” in Philippine cinema was a 1911 silent film called the Life of Moses, which is said to have shown the parting of the Red Sea and the giving of the Ten Commandments. It would be interesting to know if this movie showed the “death by the kiss of God” that I mentioned earlier.

A child sticks his neck out to kiss the foot of the Black Nazarene. 2020 (Photo Philippine Daily Inquirer)

This site uses Akismet to reduce spam. Learn how your comment data is processed.